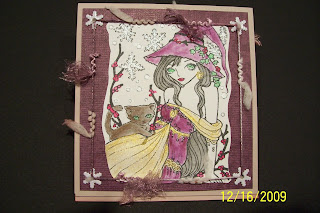 I'll bet you create cards pretty enough to display!!! Then here's just the card design for you... an easel card. I used one of the Ching-Chou Kuik images and a sentiment on Sweet Pea plate #20. After stamping the image on white card stock with black India ink, I painted it with Twinkling H2O's, and then trimmed around the image. I attached the image to a piece of decorative card stock that was cut to 3 3/4 x 4" . At this point I inserted a white snowflake eyelet in each of the corners. I threaded decorative fiber through the eyelets and tied in the back to secure. Then I attached this to a piece of pale pink card stock that was cut to 4 x 4 1/4". This is the front of the card and is attached to the base of the card as described below next to the picture showing a side view of this easel card. 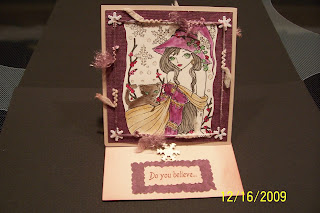 On the inside of this card I used the sentiment "Do you believe...." which is also on plate # 20.
I stamped the sentiment on a small piece of the pale pink card stock with Raisin Adirondack dye ink and trimmed with decorative edge scissors. I layered that onto a piece of the same decorative card stock used for the front and trimmed with the same scissors. I placed a white snowflake brad just above the sentiment making sure to leave a little space between the brad and the paper. You don't want to attach the brad flat to the card since it needs to support the front of the card when you display as an easel as shown in this picture. 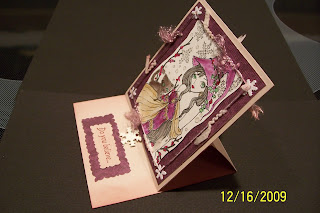 Here's a side view of the easel card to help you see how this card is put together and how it works.
This card happens to be 4" (across) x 4 1/4", but you could alter the size based on the size of the image you place on the front of the card.
There are basically 2 pieces to the card:
- 8 1/2 x 4"... this piece is scored and folded in half and then the top half is scored and folded in half again. This is the base of the card
- 4 1/2 x 4"... this piece is the front of the card. The bottom half of this piece is what is attached to the top 2 1/8 x 4" section of the base of the card.
A brad is placed anywhere from 1 to 2" up from the bottom of the base (mine is the white snowflake brad). Where you place the brad will depend on how large the sentiment or stamped image or decoration is that you place at the bottom of the card (in my case it is the saying "do you believe...").
To set the card up as an easel... when you open the card, flip/turn the front of the card so that the front bottom edge is resting up against the brad.
I hope this helps, but if it isn't clear just Google easel cards and you'll find other samples that may help you to design this type of card.
Have fun creating... Chrissy
Posted by chrissy at 6:03 AM

chrissy
I'm so fortunate to live on a lake with my fantastic husband. I'm blessed with a great family and super friends.

Welcome to our Design Team Gallery!

Welcome to the Sweet Pea stamps blog. Here you will find the Creative Team Gallery full of creations, submissions from our customers and current Sweet Pea happenings!
Visit our website at:
Sweet Pea Stamps

Current Events:
Visit One Sweet Challenge for your chance to win!

Share your Sweet Pea creations on our blog by submitting them to Jennifer.


Please note: Stamps are made to order and and can take up to one week to ship out. Sweet Pea Stamps is a one person operation and strives for quality. Please visit the contact page for store concerns. Blog and Challenge questions may be sent to Jennifer at jennifer.willis@yahoo.com.

Thank you and I appreciate your business.~Lynette